Today is the 30th Anniversary of the Day Mother Broke Her Tailbone. Or, I suppose, the day Mother’s tailbone got broken. By sister. Getting born…in a snowstorm, incidentally. Sister hates birthdays, so my mother sent an email asking what we should do for the 30th anniversary of her broken tailbone instead. Sneaky.

Personally, I’m celebrating with a gift. My family isn’t very in to “stuff” and my sister is especially nomadic (likely moving to California this summer), so if I don’t come up with something good, I don’t do it at all.

My sister enjoys photography (I have one of her photos in my dining room, and hope to use more someday), but thats about all she has on her walls. I wanted to come up with some art for her (because apparently that‘s my thing these days) but I don’t like just breaking out a rerun of something I’ve already done.

My favorite piece is my Birthday Art, which my best friend wants me to re-make for him.

And when I wanted to make something cool for Boyfriend, my take on that matched his rug (and used his nephew’s artwork). 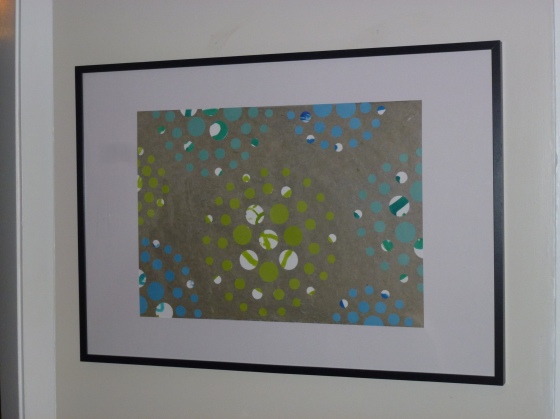 So what now? I only want to use artwork if it’s got some meaning behind it, so that’s out. What else?

I have an obsession with maps. One of my most popular project was my Map-Lined Drawer.

Between my Craft Ideas and Things for My Wall Pinterest boards, I have seven different map pins. Things like…

Then I saw this post (before or after I pinned it on Pinterest? Who knows.) So pretty. So easy*. I could use the different places my sister has lived, or places she’s visited. It would look cool and add some meaningful art.

Watercolor maps. From this awesome map to image site. 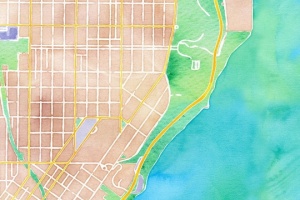 These are two of the (many) places she’s lived. I popped them in to two Ikea shadowbox frames and we were good to go.

I thought about doing something similar to the inspiration images above, but my sister is very much not a heart person…and making them too small made it tough to see the detail. We went out for dinner over the weekend to celebrate, and my dad was convinced I bought them. Win!

Are you obsessed with maps too? Can you figure out the two locations shown above?