In my last post, I mentioned adding a few beads at each end of the strand to make the necklace easier to clasp. Then, I went on to make another necklace and promptly forgot that rather elementary beading rule. The result:

(I know, I know, the photo is terrible. I’m without a digital camera at the moment, so a blurry iPhone pic is all I have to work with.)

Do you see the problem? There’s not enough room for the toggle bar to swivel and fit through the clasp loop. I even tried stretching the strands to increase the length, but as I used DandyLine, that didn’t help at all.

This is a nine strand necklace, and it took me about 5 hours to string (if not a little longer). Restringing it would be a little faster, because the pattern is already set, but the holes on some of the round beads are really small (so I couldn’t just run a needle up the strands). It would probably take me about 2 1/2 hours to restring.

Cutting the clasp would mean I’d be out a clasp, and, if I couldn’t slide the thread loops on another clasp loop or wire, I’d have to restring anyway. Now, if this was an expensive clasp, I wouldn’t even consider it. But this was a $2.00 base metal clasp* I got on clearance, so I didn’t think it was a big deal to wreck it.

I did the same thing on the other side. I think the end result turned out very nice, and it’s actually possible to close the clasp, which is a nice feature in jewelry, don’t you think? 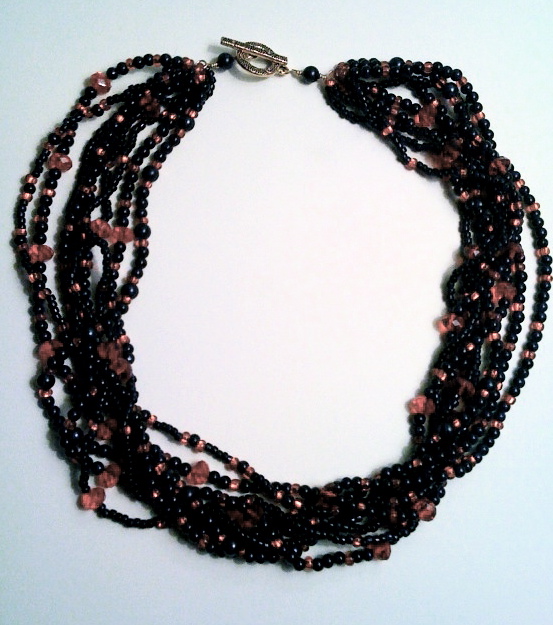 * I’m usually an advocate for high-quality materials (they look better and last a lot longer!), but this necklace was made entirely out of demonstration leftovers and bargain bin glass. I don’t spend a lot on demo materials, since I give them away. Since the clasp and black rounds were purchased for demonstrations, and the wire was leftover from another project, the only materials I bought for this project were the faceted rondelles ($1 a strand) and two tubes of seed beads ($6). I pretty sure that if there’s a time to use a base metal clasp, this is it.

† Anytime you are combining thread and wire remember to use a soldered or wrapped loop. Even if you’re an expert at closing jump rings, thread can slip right between the wire ends.