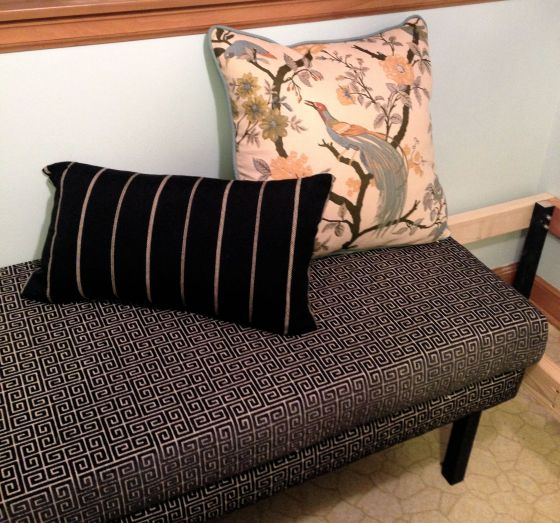 What’s handmade? That banquette bench and those pillows, that’s what!

Hey there! It’s been a while. How were your holidays? Is the new year shaping up the way you’d hoped so far?

I’m finally starting to feel settled in at the new place — it took forever. You’d think that since I was in the last place for 18 months I wouldn’t have forgotten how stressful moving is, but yep — totally forgot. Little things like misplacing the cam locks and shelf brackets for my bookshelves meant living with stacks of boxes for much longer than anticipated. I still have a box situation in some rooms (I mostly pretend the second bedroom doesn’t exist), but I’ve also managed to do a lot to make this place feel like home.

As I’ve been working on that though, I’ve had time to think about the blog in general, and I’ve decided to refocus some of my efforts here. Namely, to narrow down what I share. See, the thing is, I’m not a decorator or designer. A DIY-er for sure. A cook, definitely. But not a very good interior decorator by any stretch. Plus, I live in apartments and am more concerned with what works for me, for now, instead of what makes a great design. I should leave that area to the experts, because I think the blogosphere is already filled to the brim with amateur home decorators.

So I’m going to turn the focus back to where the blog started — homemade and handmade items and food. I might occasionally show a room or the garden if it’s relevant to a project (for instance, I built a really awesome three-piece banquette for the new kitchen!). But I hope you’ll stick around and enjoy some fun projects with me.