One of the most fun perks from running the Green Team at school is the fun toys. I’ve been to lots of meetings and heard about new and innovative programs to help people save power. Boyfriend actually consults with power companies about keeping information secure in some of the new active power management programs. In our area, ComEd will install a smart meter, which gives you real time electrical pricing and will decrease usage during peak hours.

Smart Meters aren’t for apartments, but a device anyone can use to see their power output is the Kill-a-watt. You just plug it into the wall and then plug your appliance in to the device. It measures how much power you’ve used and tracks how long its been plugged in. 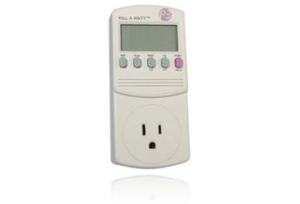 I’ve used it to measure vampire power usage (stuff thats off and plugged in but still draws some power) and how much energy appliances draw while in use, like my space heater. Just that awareness reminds me to unplug–knowledge is power and all that. My other fun toy is a smart strip–one overall outlet, two always-hot outlets and then three more that are controlled by the overall outlet. Pretty cool: If you have the TV in the overall outlet, then speakers and stuff in the others, they’ll turn on once the tv turns on. I’m still deciding where it should go (I  don’t actually watch tv), but it’s a great idea that I’m excited to try out.

Other good ideas to save energy:

What’s your best tip to save energy?

One thought on “Earth Month: Save Energy”