I planned a party. It was a little over a week ago, but the pictures just came out.

The party was really a benefit, held for the mission organization of my church. That’s their logo, which is not just relevant because the benefit was for them but because the majority of my contribution consisted of bringing that shape into the decorations. Its a ten-pointed spiky-not-chubby star.

That, combined with shades of blue, were our driving force behind the decorations. Every table had a blue tablecloth (in several shades) and a centerpiece with a glass base wrapped in a word representing one of the mission programs, and gold stars in some form.

The short centerpieces, clustered on the first two rows of tables out from the dance floor, had shallow vases filled with gravel (on top of a styrofoam cake form to save on gravel cost/weight) with a 3D papier mache star in gold. They also had small gold stars in two sizes (painstakingly punched by, um, my students) and several candles scattered around. 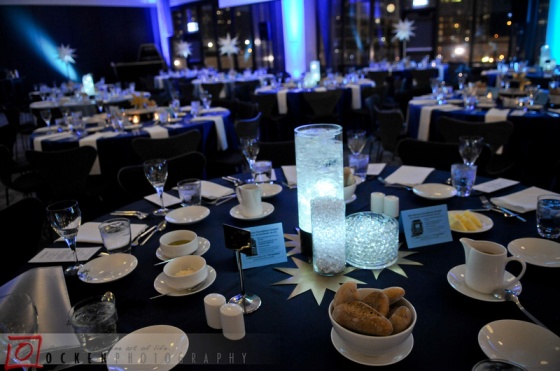 The medium centerpiece had three vases, each with a different texture, lit from within with LEDs. Each vase was on a gold star, and the shades of gold were slightly different. I used wrapping paper for the stars, so they were not expensive, and they looked very nice as bases. The tallest vase had cellophane crinkled inside and then was filled with water (I was skeptical, but this actually looks really cool as long as you are careful to fold under the top crinkle so it doesn’t try poking out), the medium had plastic crystals (they look like ice cubes) and the shortest had clear water beads. The different textures lit up looked really neat. 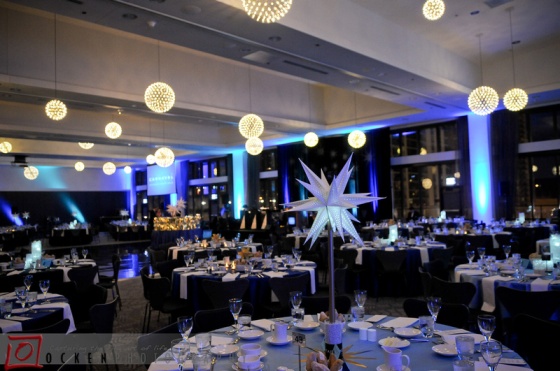 The tall centerpiece was pretty simple, with these large stars illuminated from within with LED lights on gold-covered pole (wrapping paper on PVC), held up in a dollar store vase with a word representing one of their programs or missions. The base, which you can just barely see, is an 18″ 10 point star. I made a template (math in real life!) for all of the medium and tall stars so they would look like our inspiration star above. 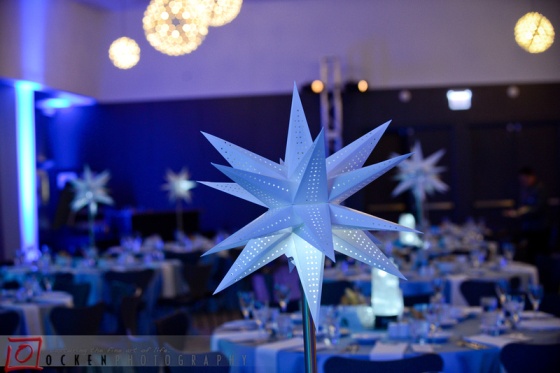 The stars looked really neat when the lights went down, and I loved how they looked with the lights in the room.

The dance floor held the bottles for the Mystery Wine Auction during dinner–you buy a ticket for a bottle of nice wine, and one lucky winner gets three really valuable bottles instead. I used three extra stars and some creative height-makers to give it some dimension and it really popped. Kathryn even ordered the gobo in the shape of the stars to project on the curtain behind the band.

The process was pretty cool–the committee chairs, Kathryn & Brad, both bought various things they thought could work with our very vague theme of “shades of blue,”  “something that goes with the cool lights” and “stars like the logo.” Kathryn found these amazing spiky gold balls that I loved, but they didn’t end up being the best fit for everything else. My main contribution was to say I could figure out how to make all the gold stars for the bases–so basically they asked me to be on the committee because I’m good at scissors.

Oh, and I was there too. At a table with a tall centerpiece, my friends from the committee and Boyfriend. We had a lovely time. Boyfriend even got us a hotel room since I was on the committee (it was super modern with bright teal carpet)! 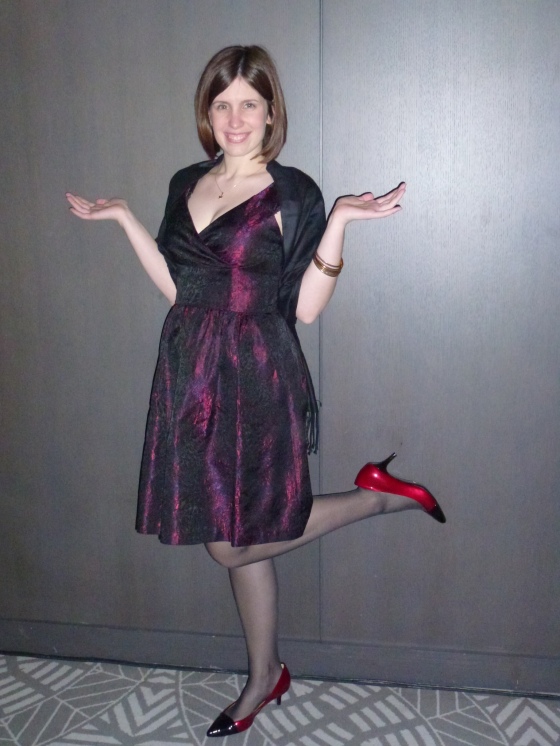 Also, my shoes matched my dress. I thought you should know.

What’s the biggest event you’ve worked on? Ever decorated for 500 some people?!

One thought on “Carnaval 2013: Gold Stars and Blue”