The third week of the CSA was a bit of a failure. I got a TON of leafy greens: three heads of lettuce, multiple bags of spinach, mustard greens, and something I never successfully identified. This on top of asparagus, turnips, beets, and tomato puree. As I spent the entire weekend out of town*, I just couldn’t get through all of it. I should have planned ahead and given more away. Major failure to plan on my part. So I mostly, had salad this week and a veggie bake with greens, tomato puree, asparagus and turnips with quinoa (not that great, so I’m not going to share it). I am, however, going to share the fabulous cake I made.

My boss’s birthday was Friday, and she is a frosting lover (and a pretty great boss), so I made her a four-layer cake piled high with plenty of buttercream frosting. Here’s a picture of the cake after 45 minutes in the office: 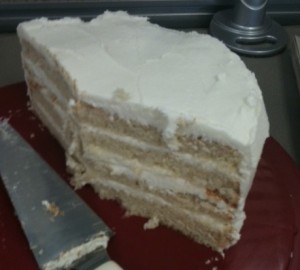 Not the best photo, but the cake was pretty awesome. It was gone by 10 a.m. — my new record.

As Lisa had requested white cake with buttercream frosting, so I searched the internet for the best recipes for both white cake and buttercream frosting. I went with this recipe for cake and this recipe for frosting. The frosting recipe made a huge batch, but I cut each layer in half to make four layers, and was very generous with the frosting between layers, so it worked out perfectly. Rave reviews!

One thought on “Cooking from a CSA, part 4: Making a really awesome cake instead of eating my veggies”