Since I can sense spring coming, just around the corner (even though it’s freezing today), I thought I’d finally share some of the lessons I learned from last year’s garden.

Our garden was a rather large (14 x 27 feet) reclaimed portion of the yard that had previously been a giant weed patch. I think before it was a weed patch it might have had some trees and shrubs that were cut down because they had been interfering with power lines, but it was definitely not a lawn or garden. The three years I lived in the building prior to our garden effort, it was just a big patch of weeds. My landlord had told me that if we (we being me and the new upstairs neighbors) cleaned out that part of the yard, he would have two raised garden beds put in. We cleaned out the weeds using a tiller and a ridiculous amount of muscle and time, but no boxes were installed. I’m still a little miffed about that. So we ended up putting in a few rows of plants directly into the ground, and used a mix of weed block fabric and mulch to try to ward off the return of the weeds.

It did not go well. 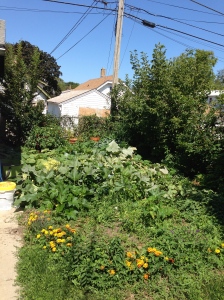 My giant garden and all it’s weeds. You can see in this picture that I was also battling out of control squash vines.

We had the perfect recipe for a never-ending weed battle: Weeds had already claimed that portion of the yard as their home, and they were not going to give it up with out a fight. And, tilling the ground meant that even more weeds had the opportunity to take root.

Our biggest problem was lamb’s ear. It was everywhere. It never stopped coming in, but it was very, very easy to rip it out as it grew. My daily routine became: Come home from work, let the dog out, rip out weeds for a half hour. Not kidding when I say every day. Why didn’t I use weed killer? Well, for one thing, the weeds were literally side by side with my vegetables, and I really did not want to kill the vegetables. For another, I was trying to be mostly organic (I didn’t buy specifically organic plants, so they might have been GMO, but I didn’t use any weed killers or bug killers). With a dog frequently in the garden and a pregnant neighbor upstairs, I didn’t want to risk using chemicals that might be harmful. This year, we’ll have a dog and a soon-to-be-walking baby in the yard, so we’ll be skipping chemicals again.

We also had a severe problem with invasive, hard-to-kill and poisonous weeds. Mullion weed, for example, is insanely hard to rip out. You can cut it back a million times, spend hours trying to dig out the deep, tuberous roots, etc., and that sucker is still going to come back. Same with belladonna, aka deadly nightshade. If you don’t rip out every last bit of vine, it’s coming back. Needless to say, while the mullion is a pain, the nightshade is actually hazard, especially since the baby will be mobile the summer. She’s really cute, so I suspect my neighbors don’t want her eating poison foliage or berries.

Mullion – a hard to kill weed

So what am I going to do? The first order of business is to finally get the raised beds in. We had one last year (previously installed by my landlord in a different part of the yard), and there were almost no weeds in it. My plan for the garden part of the yard is to do a thorough raking and remove all the debris from last year’s efforts as soon as the snow is finally gone. Then I’m going to put down a fairly solid layer of newspaper (I’ve been saving my junk mail for this purpose), and a thick layer of wood chips. This was pretty good for controlling weeds in some portions of the garden last year. I’m hoping that and fresh dirt in the raised beds, will keep the worst of the weeds and proliferation of lambs ear down.

I’m also going to try to attack the areas where I know there’s nightshade and mullion early this year and stop the problem before it starts. Part of the issue last year was that I didn’t know what I was dealing with. Now I do, so hopefully I can get a jump on it.

If you’re an experienced gardener, I’d love to know how you keep weeds in check — especially in new gardens where they might have already established themselves. Any tips?