Here’s a secret—I have really bad luck with a few breakfast dishes, mainly the ones that require flipping. I’m flipping challenged. So my omelettes always end up broken and really turn into a hybrid halfway between scrambled eggs and omelettes. I mean, they generally taste good, but I’ve yet to master the skill of creating a perfect omelette folded around a delicious filling. That should actually be a New Year’s resolution this year: I will conquer the omelette in 2014!

But, anyway, in the meantime, while I’ve been omelette challenged, I’ve gotten really good at a few egg dishes that don’t require flipping, especially frittatas. Chances are, you’ve probably had a frittata, even if it was called something else, like a baked omelette or crustless quiche or torta. It’s basically whatever fillings your heart desires, mixed with eggs, and topped with cheese. You start it on the stove and finish in the oven. I’ve seen recipes that call for six eggs and a little cheese and broccoli and I’ve seen recipes that call for three eggs and a million vegetables—the egg to filling ratio is really based on preference, and in my, case, often what I have on hand.

Here’s the first step of a frittata I made the other day: 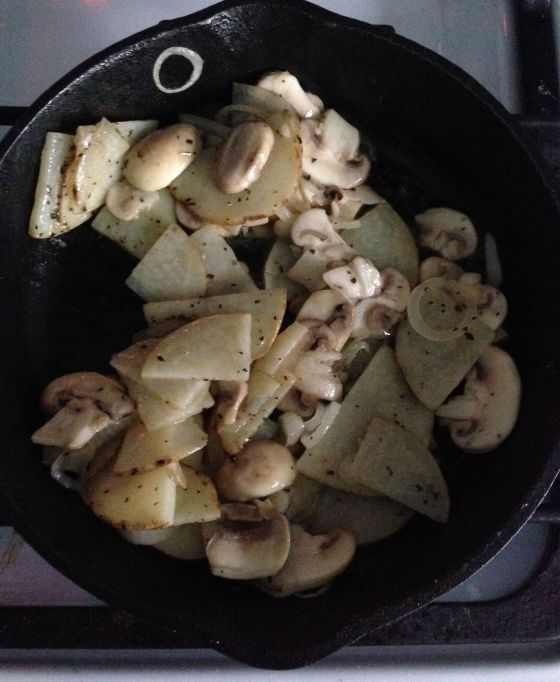 I started by preheating the oven to 450 degrees and heating a little bit of olive oil and about a tablespoon of butter in my 8-in. cast iron skillet (Hey, Mary, look – I still use the skillet you gave me when we were in college!). Then I added one small baking potato, thinly sliced, a teeny onion and about 4 oz. sliced mushrooms. Plus some salt, pepper and dried basil. I sautéed over medium heat until the potatoes were soft and the onions were starting to caramelize. Then I added my greens, in this case, some roughly chopped Lacinato kale (the nice thing about kale is that it can stand up to the eat without melting away to mush. More tender greens, like spinach or arugula, are going be much softer).

Then it was time to add the eggs. I used three eggs, whisked together with about a quarter cup of milk. Then I added it to pan. I let it cook stovetop on the pan, while I grated a little cheese (Swiss on this particular day). Then I sprinkled the cheese on top, and, using an oven mitt, moved the skillet to the oven.

I check on it regularly, since the time on the stovetop can vary a bit. I like my frittata nice and golden on top, but I know other people love them soft and barely set. Mine took about 20 minutes in the oven. 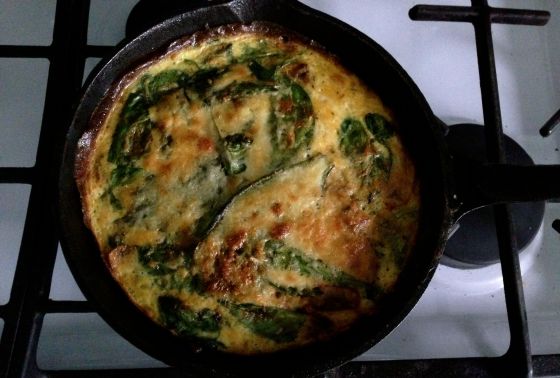 Gorgeous and delicious! If you are looking to be fancy, you can invert the pan over a platter (after loosening the frittata with a spatula) and it will fall out just like a cake. Since it was just me, I simply cut myself a generous slice right from the pan.

The leftovers are pretty good the next day, but not for much longer after that. Much like a quiche, you’re filling ingredients are only bound by your imagination, and while I mentioned breakfast at the top of the post, there’s no reason this can’t be a nice dinner as well.

3 thoughts on “Frittata: Easier than an omelette”